Why bats are extremely awesome

In an earlier post, I addressed myths about bats. Today, in honour of Bat Appreciation Day, I thought I’d write about some of the many reasons to not only learn more about bats, but also, well, appreciate them.

TThere are nearly 6 400 described species of mammals living today, divided into 29 separate groups, called orders. Bats form the order Chiroptera (it means hand-wing), which is incredibly diverse. There are some 1 400 species of bats – so more than 20 % of all mammal species are bats – and new ones are still being discovered! The most recent discoveries, in April 2020, include four species of African leaf-nosed bats.

Bats live on all continents (except Antarctica) and range in size from the 1,5 g bumblebee bat to the largest flying foxes, which can weigh 1,6 kg – three orders of magnitude – a size range greater than in any other mammal order. And (fun fact) bats have the largest range of relative testicular size (meaning compared to body mass). The weightlifter here is Raffinesque’s big-eared bat (Corynorhinus rafinesquii) whose testes are 8,5 % of his body mass (and I bet you’re now on your calculator trying to work out how big a man’s balls would be if they were proportionally that large). On the other end of the spectrum, we have the yellow-winged bat, Lavia frons, whose relative testicular mass is 0,12 % (go ahead, do the math on that too – I’ll wait). Turns out species with the biggest testes tend to have promiscuous females and (predictably perhaps), the bigger his balls, the smaller his brain – that’s what this figure shows. 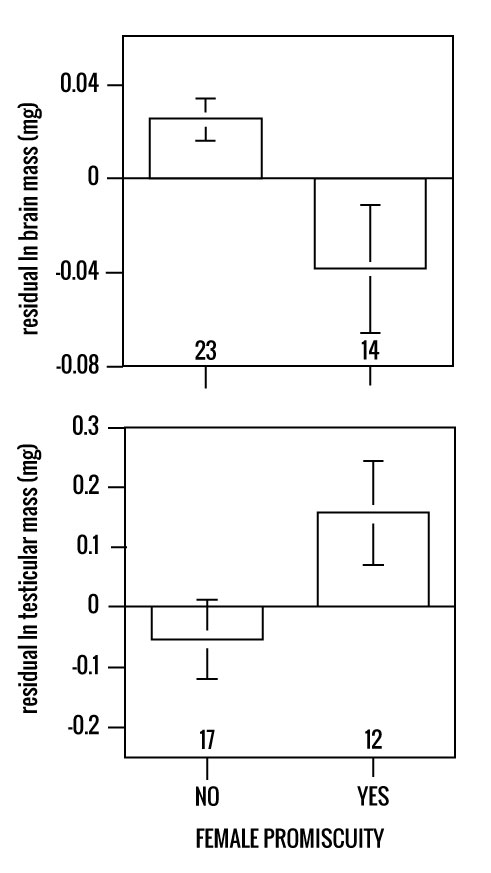 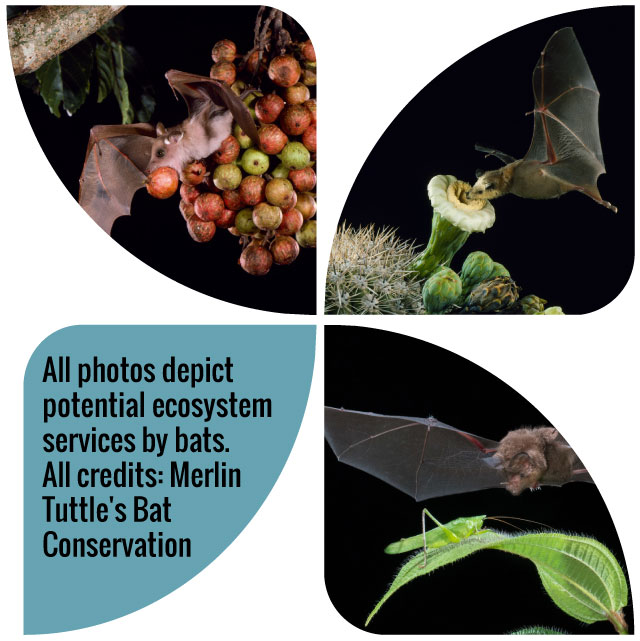 And when you compare the range of foods that bats eat, no other order of mammals comes close. Most species eat insects, but many eat flowers (nectar and pollen), fruit, fish, birds, reptiles, amphibians, spiders, scorpions and (in the case of the three vampire bat species) blood – which is pretty amazing in and of itself, because vampire bats are the only vertebrates that survive exclusively on blood. Anyway, because of their amazing dietary diversity and because bats are so numerous, they play vital roles in ecosystems – when those translate into benefits to humans, we say they provide ecosystem services.

Bats are very important when it comes to allowing plants, including many important rainforest trees, to spread to new locations. When bats eat fruit, they either chew up the flesh and spit out the seeds or swallow the seeds and poop them out. As fruit bats fly long distances, they carry seeds to new places, where they can germinate and grow into new plants. At upper left in the image above, a minor epauletted fruit bat (Epomophorus labiatus minor) is taking a ripe fig. Indeed, figs seem especially reliant on bats for seed dispersal. And because fig trees are keystone species in many tropical rainforests, bats can likely also be viewed as such.

Bats are the main (and sometimes only) pollinators of many plants, including economically important ones. If you like bananas, mangoes, agave (tequila) or durian (among others), then thank bats. At upper right in the image above, we see a lesser long-nosed bat (Leptonycteris curasoae) feeding on a flower. And (another fun fact), the award for longest relative tongue length (compared to body size) among mammals goes to a bat – the tube-lipped nectar bat (Anoura fistulata) – as revealed by Nathan Muchala, who discovered an amazing exclusive mutualism in which this bat is the only pollinator of Centropogon nigricans and the flower is the bat’s only food source. Read more about this and some other fascinating bat facts here.

The bottom photo in the image above shows a little big-eared bat (Micronycteris megalotis) catching a katydid. Like most bats, it’s an insectivore and insectivorous bats eat huge numbers of prey items – we’re talking half their body weight or more in insects each night. I don’t know about you, but I can’t imagine eating 30 kg of food in a week, let alone a night!

Bats are indeed the biggest predators of nocturnal insects, and we’re learning that they may help control their populations, including of species that are crop pests. Josiah Maine’s elegant field experiment, done in Justin Boyle’s lab, demonstrated that excluding bats from cornfields produces large reductions in yield caused by damage due to pests. The team estimated that this ecosystem services is worth nearly 1 billion USD a year in the US alone. That’s just for corn – bats render similar services on other crops, and they do it all free of charge, unlike pesticide manufacturers.

So bats are awfully diverse and important to ecosystems and to humans. So the next time you knock back a tequila shot, maybe say Salud to bats.