I spent the day with the Ervins and several other people, most of whom are involved in green building in Singapore. These included representatives from the Singapore Government’s Building and Construction Authority (BCA) and City Developments Limited (CDL). BCA created the Green Mark scheme, which rates buildings (existing and new constructions) according to how green they are. CDL is the greenest development company in Singapore, with many Green Mark certified buildings. We were joined by the Manager of Communications and Programmes at Singapore Green Building Council (SGBC) and, of course, other NUS profs, from four different faculties.

We met at the BCA academy, where we spent the morning hearing presentations by BCA and SGBC followed by a general discussion. Next, we were given a tour of BCA’s zero energy building (ZEB), the first one in SE Asia. Actually, to call it a ZEB is a bit of a misnomer – it’s actually an energy positive building because it produces more than it uses. BCA achieved this via a retrofit of a rather nondescript three story building which is now a multi-use space, with classrooms, offices, etc.

This is the Zero Energy Building at BCA Academy. Photo by SERIS, NUS, taken from https://www.nccs.gov.sg/climatechallenge/issue05/green-tech.html

As you might imagine, the retrofit involved installing solar panels – they line the roof and façade and have a combined annual output of around 200 000 kWh. What was even more interesting to me was the unique air-conditioning system. I mean, in this climate, air-con is pretty much a necessity in a building, and this one was very comfortable. Unlike traditional air-con systems, which cool air to a surprisingly low temperature (about 12ºC) and then have to reheat it, this one cools the air to 19ºC – this already represents a substantial saving. But also, the ventilation system is a single-coil, twin fan (SCTF) that controls fresh and recycled air separately. Recycled air comes out from vents in the floor – this makes more sense than the typical ceiling vents, because of the tendency for hot air to rise. Fresh air comes out of these little egg-shaped units on people’s desks, right where they need them. The ZEB also has light pipes, which are kind of like skylights, fitted with sensors that adjust the electric lights according to the amount of natural light. Other features include sensors and timers to turn off the air-con and lights when nobody is in the building and green walls and other shading devices. The office area is quite futuristic and seemed to me like a really nice work environment. 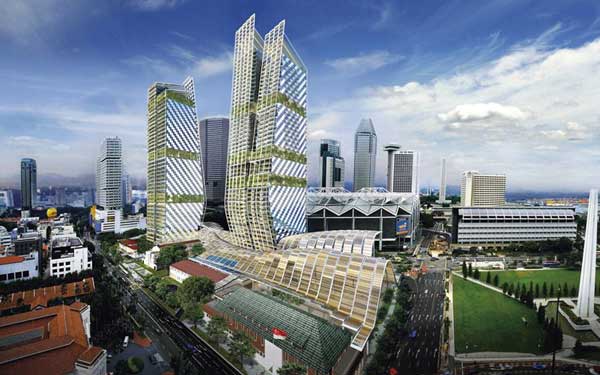 After this tour, we went to the CDL’s South Beach project. Wow! What an impressive project. This is a mixed-use development, which includes renovated conservation buildings and new constructions. The entire project received the Green Mark Platinum rating, which is the highest level of performance. See the two wild-looking towers? The residential tower houses a hotel on the lower floors and luxury condos on the upper floors. The other tower has office space. Compared to conventional buildings, estimated savings of electricity are up to about 4,3 million kWh/yr for the office tower and up to about 2 million kWh/yr for the residential tower. Estimated savings of water are up to about 44 000 m3/yr for the office tower and nearly 55 000 m3/yr for the residential tower.

There really are too many innovative and impressive energy- and water-saving features to describe, but CDL won the contract not based on its bid being the lowest, but rather based on the ‘wave’. The ‘wave’ is a microclimatic canopy made of slats that houses lots of greenery, the three conservation buildings and retail and food and beverage outlets. The entire outdoor area therefore becomes a promenade. The ‘wave’ provides shelter from the sun and rain, harnesses solar energy, mitigates the urban heat island effect and collects rainwater that is then used to irrigate all the plants. And, as you can see from these images, it is really quite amazing to look at. Also, the underside is fitted with LED lights, and every night, there is a synchronised music and light show that plays from 19h00-midnight. This light show should further enhance the social benefits of the space. We got to see a recording of it – it was really very cool and I plan to go check it out sometime soon. However, I do have some concern about the necessity of the feature. Although LEDs use less energy than conventional bulbs (and in this case, they are powered by the ‘wave’), they contain substances that are harmful to the environment, such as lead and arsenic, and you can read more about it here.

We got to spend a fair amount of time in one of the conservation buildings, which used to be an army barracks. CDL preserved the building façade (as required by law in Singapore), and retained some of the original interior features, while paying homage to the site’s history in creative ways. The ceilings are the original, exposed concrete, and they’re covered (as are the walls) with vintage photographs from the area. We were served a fantastic lunch in an almost surreal dining area, what South Beach calls “The Vines”, as a tribute to wine production. This building, like the attached hotel, features some of the most unusual finishings and fixtures I’ve ever seen, notably the diverse chandeliers. The ones in The Vines were made of coloured, blown glass and were absolutely exquisite. But my favourite was the chandelier in the room that housed the chef’s table. It was made entirely of dainty teacups, saucers, teaspoons and knives, all in white porcelain. With the mirrored walls on both sides, the effect was ethereal. Take a look at the images (and the two videos) and see how this hotel is a whimsical feast for the eyes. I must admit to having a pretty strong interest in design.

Being able to tour these buildings in the company of the Ervins and receiving the red-carpet treatment was unlike anything I’ve ever experienced and is something I won’t soon forget. You can see from the various photos that the South Beach development really is something that the architect, the developer and Singapore should be proud of. For me, it was also very interesting to be included in the meeting and lunch, and to learn much more about the complexities of green building. For instance, we talked about getting people to buy into the concept. For new buildings, it may be easier. After all, they generally pay for themselves (offset the added costs compared to those associated with traditional construction) in about four to seven years. But it is far less cost-effective to retrofit existing constructions. So how do you get people to buy in? It seems that incentives vary among countries. Some governments give subsidies (or tax credits), as has been the case at different times in the US, and some lenders offer lower interest rates for green developments and retrofits. Singapore already has the world’s highest percentage of green buildings, with a target of 80 % by 2030, and is serious about achieving that. BCA’s 3rd Green Building Plan incentivises owners by co-funding retrofitting costs and mandating green buildings. The knowledge that these incentives will disappear in a few years further motivates people to go green now.