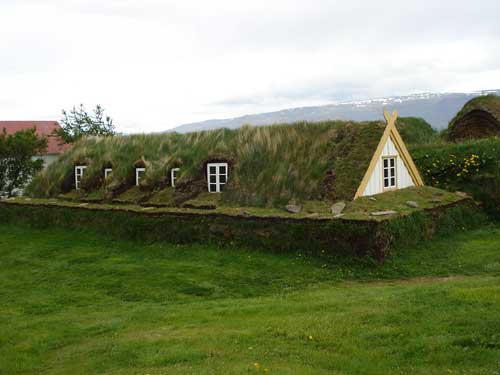 Finally, time for Ms Ervin’s lecture at NUS, to a pretty full auditorium. She started by describing how the term “green building” has evolved. Not so long ago, it might have evoked images of something like the turf houses of Iceland, as in the photo at right. Today’s green buildings are diverse and lead into the concept of greening the built environment. And don’t underestimate the importance of green buildings. Perhaps when you think about the current climate change crisis, you think about cars and other modes of transportation before buildings. But buildings are major emitters of greenhouse gases (GHGs) – they’re responsible for roughly 40 % of GHG emissions in the US – a contribution greater than that of the transport sector. Buildings account for: 72 % of total electricity consumption in the US, more than 15 % of the world’s freshwater withdrawals and about 40 % of global use of raw materials.

Ms Ervin touched on the various successes and failures of the green building movement, focusing particularly on the US Green Building Council, which helped bring all the various stakeholders together and whose LEED rating systems really helped the movement gain traction. The real estate market has been transformed, with huge growth in the green building market anticipated over the next five years, and governments have begun to mandate green building. I was surprised to learn about California’s ambitious commitment: all new residential constructions will be zero net energy by 2020 and all existing constructions will be retrofitted to meet that target by 2030. 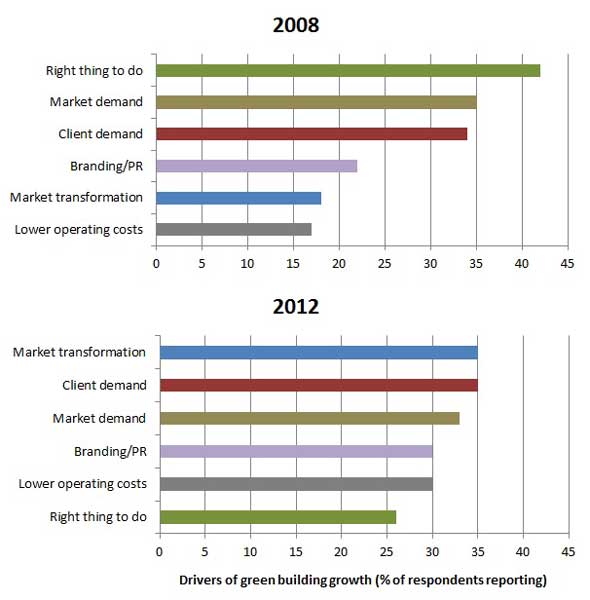 The growth in the market seems fairly unrelated to geography and is not limited to the developed world. It is driven by various factors, and what was really interesting to me was how these have changed over time. In 2008, when McGraw-Hill Construction studied green building in the global marketplace, it found that the main driver behind going green was the fairly idealistic desire to “do the right thing”. As you can see from this figure, just four years later, it was much more about business, i.e., the relative importance of client and business demand and low operating costs. Clearly, the market has shifted.

A lot of ground was covered in the roughly 40-minute talk, and then Ms Ervin deftly handled audience questions, some of which were quite difficult to understand. As an aside, while I love Q&A sessions, I often find myself wishing that people would carefully formulate their questions to make them clear and succinct. As a frequent speaker, I can tell you that asking multi-part, convoluted questions is not a very nice thing to do. Retaining the content is much more difficult than you might expect, as is delivering an adequate answer. One of the more interesting questions (though it could have been prepared better) was by a young architect who raised the issue of LCAs, specifically the fact that much of the wood (and implicitly, other building materials) used in green buildings are not really green at all. Ms Ervin acknowledged that this is a major area for improvement, as is ensuring that “green building” evolves into a more holistic concept that is more akin to urban greening.

Overall, the talk and all the related activities were both relevant and inspirational to me. I made useful contacts, and now plan to integrate the knowledge I gained into my urban ecology course, for which I’m planning an activity that will bring together participants from BCA, CDL, SGBC and NUS to engage my students in a discussion session.