Until this week’s topic, I’d never given much formal thought to the concept of digital literacies or even heard of Prensky’s digital natives vs immigrants dichotomy. So the paper by White & Le Cornu’s and David White’s video were enlightening. What resonated most with me were the assertions that there isn’t a dichotomy so much as a spectrum and that our motivations more than our age determine which online spaces we inhabit and how.

White’s characterisation of online behaviours into four quadrants based on crossed continua from digital visitors to residents and personal to institutional inspired me to think about the nature of my online activities (and to ‘remix’ the diagram – I quite liked Doug Belshaw’s idea of remixing as a pathway to developing digital literacies). My result is below, but it was just as interesting to see similar comparisons by other ONL participants during our webinar. It all just reinforced (for me) the need to be aware of diverse digital literacies. 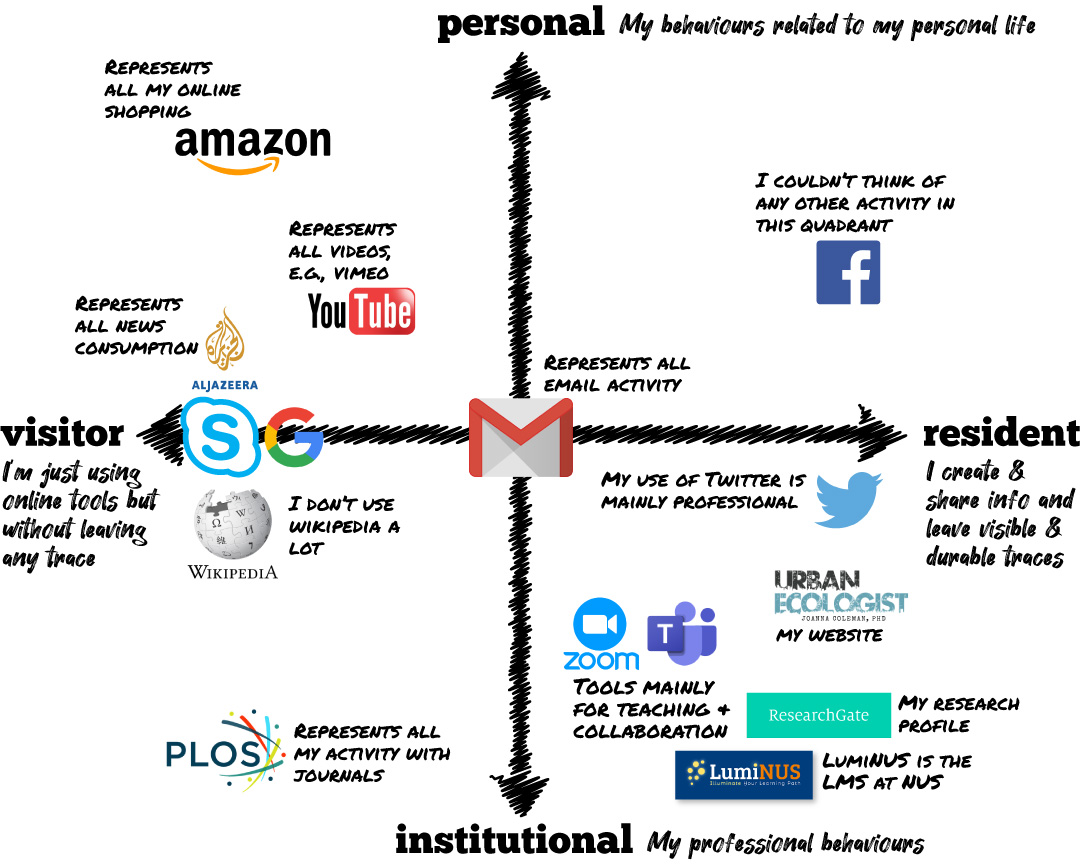 Ultimately, I think as a late Gen-Xer – I remember the dawn of the Internet and social media but have been using them for more than half my life – I am comfortable online and readily acquire new literacies, like how I quickly adapted to teaching online last semester. Meanwhile, I sometimes feel like a luddite compared to my students and unable to relate to certain aspects of their behaviours.

For instance, the way Millennials and Gen-Z have these online personas, their selfie culture and, above all, their habit of turning to social media as a news source and gauging the validity of information by its popularity. I say “above all” because before watching White’s video on credibility, I was already alarmed by what I see as a growing tendency to scan a headline (why read the whole story?) or see a meme and deem the info worth spreading almost as if it were peer-reviewed or at least published and verifiable.

The amount of misinformation and disinformation online is a huge concern, especially at a time when humanity is facing its greatest challenge – the environmental crisis. A crisis that can only be solved via an approach that is based on evidence and grounded in ethics. Reflecting on this week’s materials, I realised something encouraging about my practice. For four years, I’ve been engaging my environmental-studies students with online assignments (blogs) that develop Belshaw’s eight essential elements of digital literacies, i.e., the 8Cs as in the diagram below (again remixed). Hopefully this will contribute to my end goal of graduating environmental change-makers.

All logos used in the upper figure are in the public domain, except the three below.