Let me start this post by looking back at my PhD candidacy exam. Here’s what this rite of passage involves at University of Calgary. The professors on the supervisory committee and internal examiners all submit questions to the PhD supervisor, who whittles them down to three pairs of questions sent to the PhD candidate. The candidate chooses one per pair and has three weeks to submit three ‘substantive’ research papers (one per question). One week later, at the oral exam, the same faculty members can grill ask the candidate about: the papers, the questions the candidate chose not to answer or the candidate’s specialisation.

My specialisation was urban wildlife ecology and here’s one of the questions I chose.

In choosing your “area of specialisation”, you implicitly suggest that “urban ecology” is a distinct discipline. Convince us that it is, rather than simply a narrow aspect of ecology or conservation biology. Is there a unique conceptual framework or a set of unifying principles that defines urban ecology and distinguishes it as a discipline, and if so what is it?

Frankly, I only chose it because it was the best option in a bad pair. And that’s saying a lot, because I had never researched and discussed philosophies of science and education or pondered the meaning of ‘discipline’ before.

As to the question of whether urban ecology has its own unique conceptual framework or central paradigms… it does not. Therefore, it generally borrows existing ecological theories, some of which may be more appropriate than others (Collins et al. 2000, Kaye et al. 2006).

Given that even then, many (e.g., Kaye et al 2006, Dooling 2007) still viewed urban ecology as an emerging, or at least, young discipline, things have changed fast. If I had to rewrite my candidacy exam today (OMG please no), the above statement would no longer be appropriate. Because urban ecology now has three well-recognised paradigms. 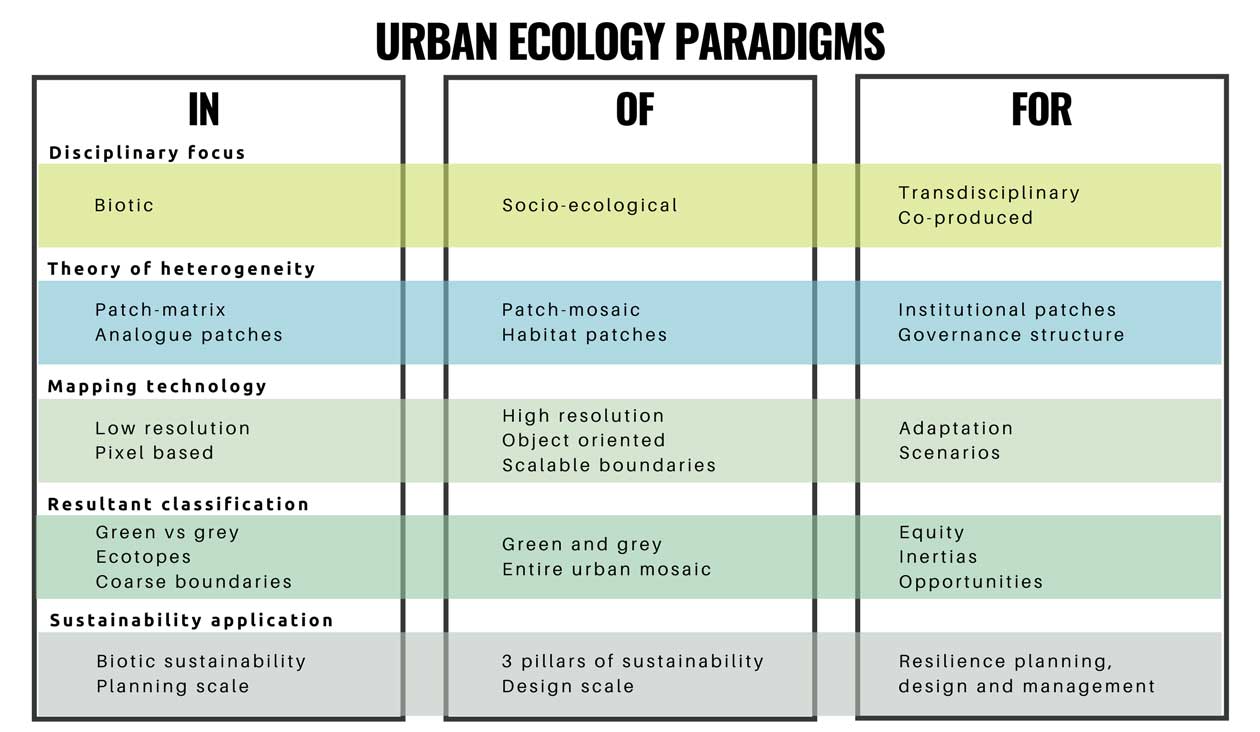 The traditional (and still dominant) one is “ecology in cities”. It’s ecology, but urban environments are the foci. Research has generally involved comparing ecological patterns and processes, such as soil decomposition rates and biotic assemblages, between urban and non-urban areas (see also Pickett et al 2001).

Since then, we’ve seen the emergence of a more holistic “ecology of cities” that incorporates the earlier paradigm. To my knowledge, it was first defined (Grimm et al 2000) as seeking to explain these patterns and processes by examining city-wide phenomena, such as biogeochemical budgets and ecological footprints. Here, we view cities as complex, socioecological systems as opposed to comparing between inside and outside the city.

In the last decade, a new paradigm has emerged. “Ecology for cities”. It recognises (and is grounded in) knowledge gained under the other two and goes further by adopting a value-laden stance – one that (IMO) brings urban ecology closer to conservation biology. Because the value is stewardship and the underlying ethics include justice, solidarity, sufficiency and participation – the same ethics that underpin sound conservation decision-making. Now, we have a goal – sustainable and liveable cities. And in trying to achieve it, we incorporate input from diverse stakeholders – not just in determining the feasibility (read, palatability) of solutions, but throughout the process, from conceptualising research to implementing outcomes.

For more on the evolution of urban ecology, see this open-access paper. In the above figure (redrawn), Pickett et al depict the three paradigms in terms of (from top to bottom row) their disciplinary foci, underlying theories and main mapping technologies, the classifications they produce and their applications to sustainability (the goal that ultimately drives everything I do).

Seeing my field evolve like this has stimulated me to think deeply about my work and where it fits in. And I see that the fusion of my scientific curiosity and ever more mission-oriented (conservation) approach has led me to organically (rather than by design) develop research and teaching agendas that embrace all three paradigms.