Back in 2019, at the International Bat Research Conference in Phuket, Thailand, I gave a talk on knowledge and views of bats among Singaporeans – the work of my honours student, Cheryl YIP. At the end of the talk, I said this was the pilot for a global study I was keen to do, and invited conference attendees to collaborate with me. This led to a poolside meeting and, eventually, the formation of a small group of researchers who were interested in embarking.

Four of us – Drs Tanja Straka, Ewan Macdonald and Tigga Kingston and I – upon Tanja’s suggestion decided to create a research project investigating the state of the literature on this topic – the human dimensions of bat conservation. When I say human dimensions, I mean the aspect of conservation social science that considers our relationships with wildlife insofar as these affect conservation. How people think, feel and behave with respect to wildlife – considering that all biodiversity loss is ultimately the result of human behaviours, mitigating the crisis really hinges on understanding and modifying our behaviours.

Around the same time as we began this project, a paper was published by Dr Victoria Martin – she described four major problems that arise when natural scientists (like us) carry out research that is fundamentally social-science based. We used these critiques to guide our evaluation of the literature on human dimensions of bat conservation. Did authors ground their studies in conceptual frameworks from the social sciences ? Did they carry out thorough reviews of social-science literature ? Did they follow social-science best practices ? We examined how well papers performed in light of the backgrounds of authors, i.e., did papers written entirely by social scientists and/or involving collaborations between social and natural scientists do better than papers written just by natural scientists ?

In the end, we determined that in some respects, there was a strong basis to argue for the meaningful inclusion of social scientists (as well as local stakeholders) in human-dimensions studies and generated nine other recommendations to improve this area of research, as it pertains to the conservation of not just bats, but perhaps wildlife in general – these 10 recommendations are portrayed in the tree figure below. Read our paper here. 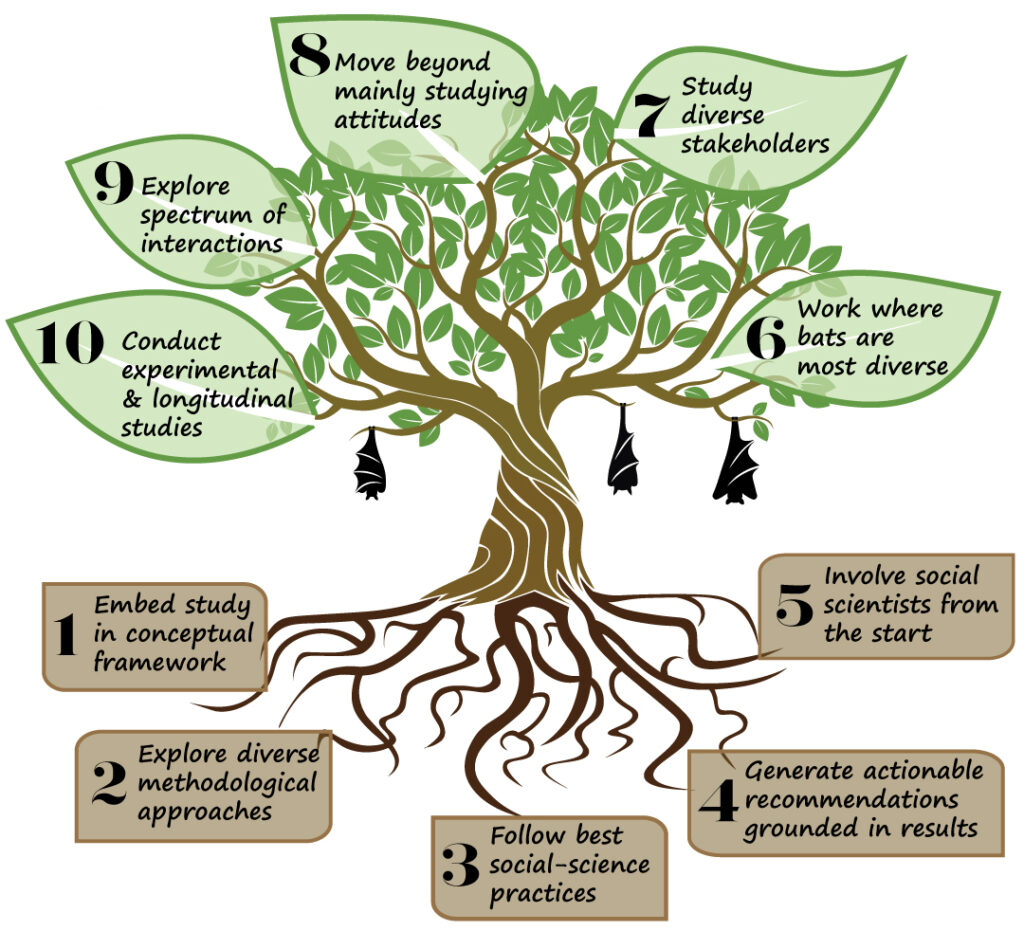 In the process of working on this project, I learned a lot about social sciences (though I still have much learning ahead) and became friends with these three wonderful people. We are now collaborating again, along with Drs Ricardo Rocha and Will Tuladahar-Douglas, on human dimensions research under the umbrella of the Bat Specialist Group of the IUCN SSC.