Social perceptions of bees and urban beekeeping in Singapore

Singapore (SG) imports over 90 % of its food. Given that SG is a small island nation, a high reliance on imports isn’t unusual. But it is exacerbated by the high rate of urbanisation, severe land scarcity and the fact that only around 1 % of SG’s total land area is zoned for agriculture. This problem is not unique to SG. Around the world, urban development gobbles up valuable arable land and so how to feed our growing population, especially given likely future food crises, is a big concern.

In this context, the rising interest in urban farming is not surprising. Urban farms can address the issue of competing land uses, increase food security and reduce transport of food and thus carbon footprints. Singapore aspires to develop a viable urban food industry and several companies (such as Comcrop, Sky Greens and Sustenir) hope to cash in on this trend big time, while various non-profits are trying to raise awareness and promote urban farming.

In 2015, one such enterprise was Pollen Nation, though its Facebook page has no activity since mid-2018. Its aim was to raise awareness of bees. It also humanely dealt with hives near people, by removing and relocating species that might be dangerous to humans to forested areas and harmless species (e.g., stingless Trigona bees) to areas where they could pollinate urban crops and produce honey. Thus, it was fundamentally promoting urban beekeeping.

At the time, urban beekeeping had been more or less established in many big cities, but not in SG, where even now, in 2020, it’s catching on only slowly. Zi Jin’s project was sparked by a meeting with the founder of Pollen Nation, which lacked data on public perceptions – data that could have helped it best direct its efforts.

She asked why the public didn’t seem to be embracing urban beekeeping like urban farming – was there a real lack of receptiveness? If so, why? She assessed societal knowledge and perceptions of urban bees and beekeeping.

She used Q-methodology (Q-method), which lets researchers explore subjective perspectives and consider the wider societal discussions about a given topic. One thing that differentiates Q-method from other quantitative methods is the small number of participants involved. The goal is to shed light on the nature of the diverse viewpoints, not the number of people expressing them, so instead of describing a population of people and their views, we are describing a population of viewpoints. The first step involves interviewing well-informed stakeholders (25 in this study) and then creating a collection of statements (44 in this study). These statements collectively form the “concourse”, which reflects the gamut of potential views. Next, we perform the Q-sorts (shown in photo). Here, we interview a second set of participants (18 in this study) and ask them to rank the concourse statements according to their level of agreement. Finally, we analyse the data (using factor analysis) and interpret the results, deriving a set of statistically different viewpoints (factors) that highlight different concerns and understandings. Zi Jin uncovered three. 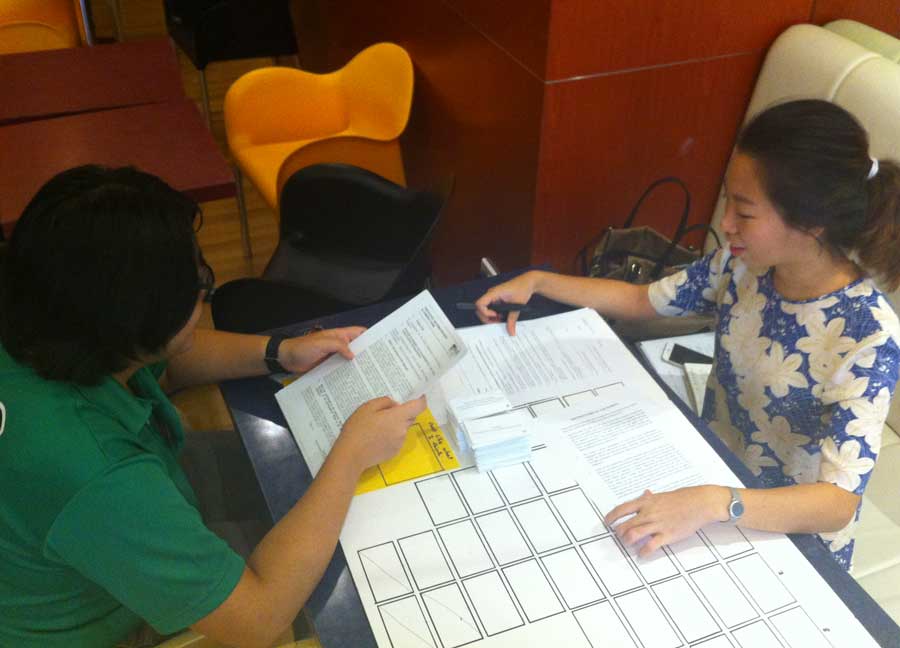 These individuals hold eco-centric worldviews and are mainly concerned with ecological relationships in an urban ecosystem. They tend to think urbanites are connected to Nature. They view conservation as an ethical obligation and support using science as a tool to achieve it. To them, the priority is the wellbeing of bees.

These people hold anthropocentric worldviews and almost utilitarian approaches to Nature. They hold the most pessimistic views in describing humanity’s disconnection from and disinterest in Nature. They dismiss the need for further conservation studies and standards. They think urban beekeeping, despite being a potential way to promote connectedness to Nature, isn’t the best one. Instead, it should only be done away from people and can’t be integrated into SG’s City in a Garden concept.

These people prioritise economic growth over conservation, and yet uphold the ethical duty to conserve. Interestingly, they oppose valuating the ecosystem service of urban beekeeping. Instead, they perceive its main benefit as lying in its potential to further enhance urbanites’ connection to Nature (which they view less positively than people in factor 1 but more so than those in factor 2) and change societal perceptions of bees.