Deforestation, including that associated with urbanisation, produces huge losses of biodiversity not just by removing habitat for organisms, but also by preventing them from moving among remnant forest patches. This is because the intervening matrix is often impermeable (hostile) to movement of many organisms. Although we don’t tend to think of plants as moving, they do in the sense that they have evolved mechanisms to disperse their seeds.

Some seeds are wind-dispersed (like those of the dipterocarps that dominate most of SE Asia’s rainforests), while others are dispersed by animals (like those of Ficus, or fig, trees that are keystone species in tropical forests around the world). And so, animal seed dispersers play a vital role in ensuring that native plant stocks are well-propagated and, in turn, helping to prevent the establishment of introduced, invasive species.

This is all very relevant in Singapore (SG), which has lost most of its original forest, originally due to agriculture and more recently, to urban development. Today, the matrix consists mainly of urban land cover and the level of fragmentation is high. So, if the matrix is a barrier to animal movement, then this threatens the survival of plants that persist in patches of forest.

In this context, Kelly used camera trapping to quantify the occurrence of potential seed dispersers in forest patches in sites along a gradient of succession (primary, old and young secondary, abandoned rubber plantations, wastelands) and of distance from old-growth forest. In this photo, she’s setting a Reconyx camera to record in secondary forest. And let me give her a loud shout out for looking at 4 800 images captured over 4 536 trap-hours (science can be tedious). 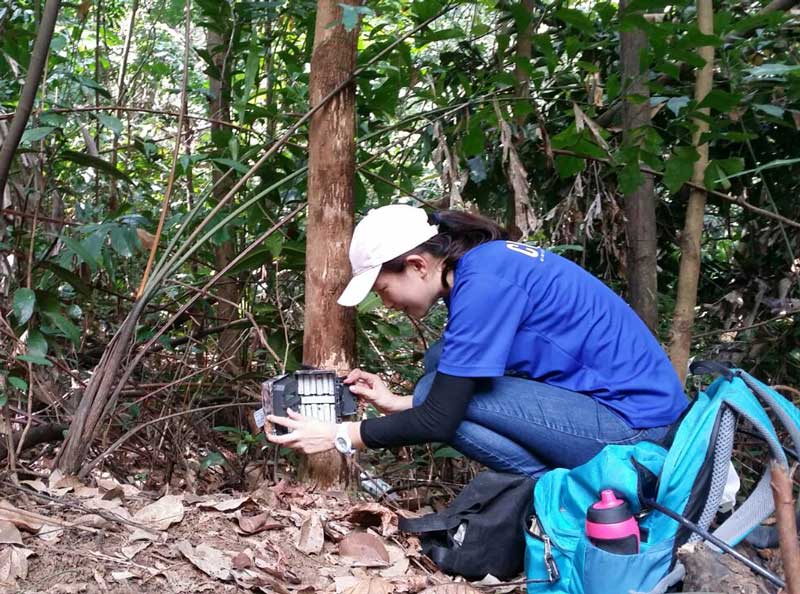 She discovered that in general, succession stage and proximity to old-growth forest are positively correlated with the diversity of these animals. However, in wastelands, proximity to old-growth doesn’t matter. Also, primary and young secondary have the most similar species composition of potential seed dispersers. Finally, secondary forests have the highest diversity (Shannon-Wiener) and dominance (Berger-Parker) indices – a finding she attributed to the fact that they have more generalist and exotic species.

This bar chart portrays the frequency of occurrence of species in old and young secondary forest – blue dots above bars are for introduced species (the orange one is for a winter resident) – we can that they rarely occur in old forest – a bit like what happens in park connectors, as her lab mate, Prab, found.

In 2020, Kelly completed her Master’s of Environmental Management (including a research thesis on best practices for sea-turtle hatcheries, which she did under my supervision). Although she hopes to eventually pursue a PhD, she is now conducting an insect diversity survey for a major development project in SG.