Effects of aircraft flyover on biophony

The ecological soundscape consists of all sounds produced by humans (anthrophony), non-human animals (biophony) and the abiotic environment (geophony). And soundscape ecology can shed light on biodiversity-wide impacts of human activities based on the acoustic niche hypothesis – the idea that animals partition themselves into acoustic niches to avoid masking. In general, we can expect that as human activities degrade habitat quality, e.g., via disturbance, the density and diversity of sounds in different bandwidths of the biophony may decline. 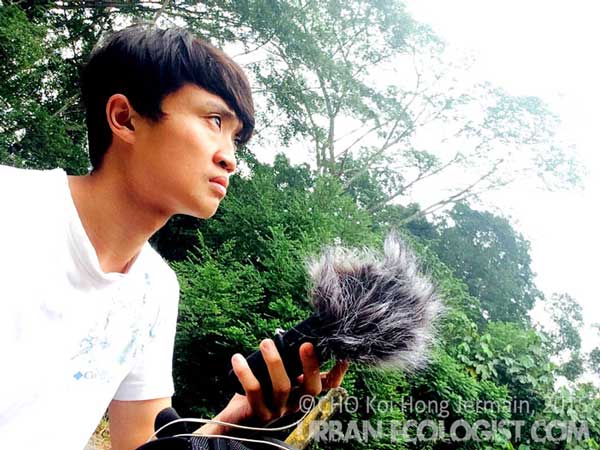 Interest in this emerging field has diverse motivations. Jermain’s was deeply tied to his interest in music – indeed, he’s an excellent musician and composer. He also serves his national service in the Air Force (RSAF). And so, an idea was born – one that represented a novel research question not just as the first soundscape ecology study in Singapore (SG), but also as the first to use this approach to understand the impact of low-flying aircraft.

Jermain studied the impacts of one source of anthrophony – aircraft – on biophonies in Singapore. Changi Airport is already one of the busiest ones in the world, and current expansion plans will greatly increase the amount of passenger air traffic. Also, the Republic of Singapore Air Force (RSAF) conducts many daily training flights using various models of helicopters, fighter jets and transport planes, some of which fly over natural areas at low altitude. The RSAF also plans to upgrade its fleet with new F-35s, which are twice as loud as the loudest jets (F-15s) that it currently operates. Jermain worked in green spaces, where he recorded the biophony before, during and after flyovers by aircraft to see how it changes and how long it takes to return to ‘normal’. He discovered spatial variation in local biophony and a negative impact of low aircraft flyovers. He completed his project in April 2016.

Jermain worked in four green spaces close to and in the flightpaths of Tengah and Paya Lebar air bases, and recorded the biophony before, during and after flyovers by various aircraft to see how it changes and how long it takes to return to ‘normal’. He discovered that biophony differs among sites and is affected by low flyovers. First, entropy (amount of chaos) is generally higher after a flyover than before, more so for louder events and jets in formation. Helicopters also have a large impact, but in the opposite direction – they cause biophony to become more in sync. The change in maximum power (volume of the loudest element of biophony) are clearer – flyovers (especially by helicopters) cause it to increase – more so as they get louder.

On this spectrogram, brighter colours are louder. The two yellow peaks are a flyover by fighter jets in formation. Before they appear, an unidentified animal (probably a bird) is vocalising between 12 and 13 kHz and crickets are stridulating between 6 and 7 kHz. We see the disappearance of the bird and a break in the cricket chorus from 19:10 to 19:20.