Use of artificial (commensal) roosts by bats in Singapore

Urbanisation is probably detrimental to most bats. Most studies report that urban bat assemblages are less diverse than non-urban ones and some (as in my PhD) report reduced reproduction and/or fitness. In Singapore (SG), massive deforestation, driven by agricultural and urban land uses, and other pressures has clearly affected the bat assemblage, which has lost several species.

However, certain aspects of urbanisation may not be detrimental to all bats, and some urban features may benefit some species, even helping them expand their distributions. This may be especially true for bats that exhibit commensal roosting, meaning using anthropogenic or artificial structures, such as buildings, bridges, etc. But commensal roosting is a poorly studied adaptation, especially in the tropics.

The impetus for Zoe’s project was anecdotal evidence (and my own observations) of bats in commensal roosts – she identified which bats exhibit this behaviour and described attributes of their roosts at the microhabitat and landscape levels.

Even though SG has as many as 21 species of bats, only six occupied a total of 25 commensal roosts. They include two Old World fruit bats (Pteropodidae) and four insectivores.

The roosts were in six types of structures, made of five materials, although roof spaces and concrete were the most common structures and materials, respectively. Relative variation in most attributes of roosts was high. And while brighter light underneath roosts is linked to delayed emergence in the evening by fruit bats, there’s no relationship between luminescence and emergence time of insectivores – that may be an artefact of a smaller and more speciose sample for them.

The most common commensal-roosting bat, by far, is the dog-faced fruit bat (Cynopterus brachyotis). Possibly an expected finding given that it’s the most common bat in SG, but here’s the thing. Elsewhere in its range, it is only documented to use natural roosts. In fact, its natural roosting behaviour is either tent-making (bats chew leaves of certain species to form a tent) or roosting from branches and petioles. Just think about the huge difference between a leaf and a hard, artificial substrate. Maybe this adaptation helps explain why this bat persists in such large numbers in SG. For it, the only roost attribute that seems to matter is height – otherwise, the diversity of its roosts seems to exemplify the concept of the urban adapter – a concept that Zoe’s successor, Angela, followed up on via a dietary study.

Zoe is a secondary-school biology teacher. 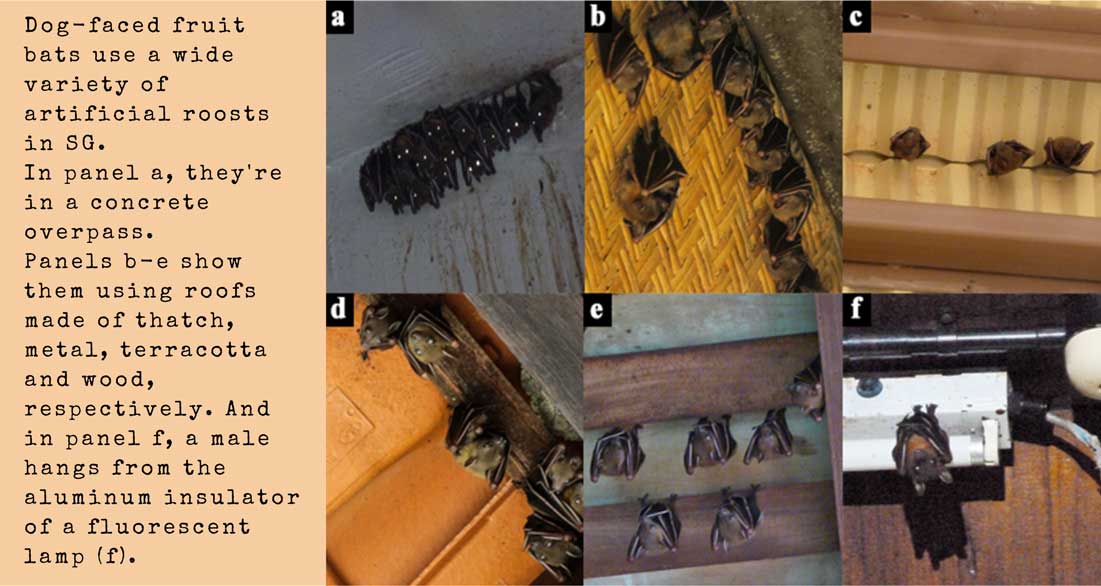