The switch to LED lighting – ecological impacts on insects in Singapore

One of the most stereotypical abiotic changes in cities is the increase in artificial light at night (ALAN) – indeed, maps of ALAN captured by satellites reveal the locations of settled areas and are used as urbanisation gradients on a global scale. And its ecological impacts are reasonably well-documented. There’s at least one whole book on the topic, and certain issues are familiar to many people. One is the fatal attraction of insects to lights. Many nocturnal insects, notably moths and mayflies, exhibit positive phototaxis – they orient toward light. As to the mechanism that explains why they swarm to artificial ones – it remains elusive. Regardless, this phenomenon can have cascading effects, for example on aerial insectivores.

Still, most knowledge of ecological impacts relates to traditional lighting technologies. However, private and public agencies around the world are now replacing traditional (often high-pressure sodium; HPS) outdoor lights with LEDs. LEDs offer several advantages over HPS lights. These include better visibility and safety, longer lifespans, reduced energy consumption and lower carbon footprints of manufacture. With outdoor lighting contributing meaningfully to the carbon footprints of cities and the urgency of the climate crisis, such retrofits are environmentally responsible. But there’s some concern about (and little knowledge of) the ecological impacts of LEDs. So, as retrofits proceed apace, we are seeing a flurry of studies. Some document negative effects on some animals, whereas others find none.

Given that nobody had studied the ecological impacts of LEDs in the tropics or in a very brightly lit locale like SG (the most light-polluted nation), I created a twinned before-after-control-impact study for two students. Kenneth focused on insectivorous bats, while Xin Yi focused on insects – at right, she’s putting up one of her sticky traps. 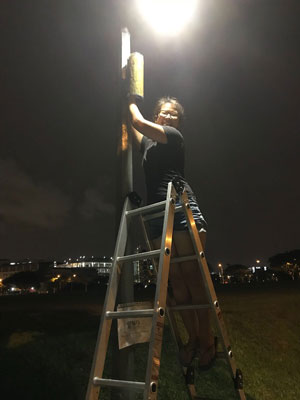 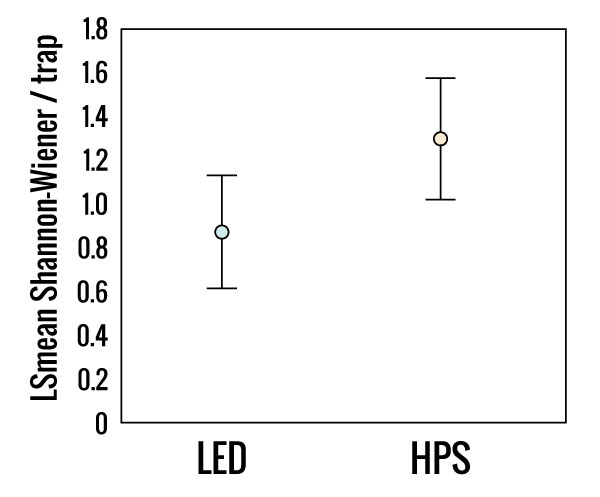 These results suggest some benefit of the retrofit to insects, at least in SG, which is a bit surprising given that work elsewhere (albeit in a very dark locale in the temperate zone) found that LEDs were more attractive to insects. A question that interests me now is whether the retrofit also reduces human interactions with disease vectors. For instance, leishmaniasis is a tropical and subtropical zoonosis that represents a major public health threat. Many of the sandfly species that transmit it are positively phototactic. If LEDs attract fewer of them (which we don’t know because Xin Yi didn’t ID flies to subfamily), then the retrofit could be an epidemiological win.