The switch to LED lighting – ecological impacts on bats in Singapore

One of the most stereotypical abiotic changes in cities is the increase in artificial light at night (ALAN) – indeed, maps of ALAN captured by satellites reveal the locations of settled areas and are used as urbanisation gradients on a global scale. And its ecological impacts are reasonably well-documented. There is at least one entire book on the topic, and certain issues are familiar to many people. One is the fatal attraction of insects to lights. Many nocturnal insects, notably moths and mayflies, exhibit positive phototaxis – they orient toward light. As to the mechanism that explains why they swarm to artificial ones – it remains elusive. Regardless, this phenomenon can have cascading effects, for example on aerial insectivores.

That said, most knowledge of ecological impacts relates to traditional lighting technologies. However, private and public agencies around the world are replacing traditional (often high-pressure sodium; HPS) outdoor lights with LEDs. Now, LEDs offer clear advantages over HPS lights. Like, better visibility and safety, longer lifespans, reduced energy consumption and lower carbon footprints of manufacture. With outdoor lighting contributing meaningfully to the carbon footprints of cities and the urgency of the climate crisis, such retrofits are environmentally responsible. But there’s some concern about (and little knowledge of) the ecological impacts of LEDs. So, as retrofits proceed apace, we’re seeing a flurry of studies. Some document negative effects on some animals, whereas others find none.

Given that nobody had studied the ecological impacts of LEDs in the tropics or in a very brightly lit locale like SG (the most-light-polluted nation), I created a twinned before-after-control-impact study for two students. Xinyi focused on insects, while Kenneth tackled insectivorous bats. I took this photo of him in Costa Rica, on an NUS trip that I was academic lead for (rough life, I know). 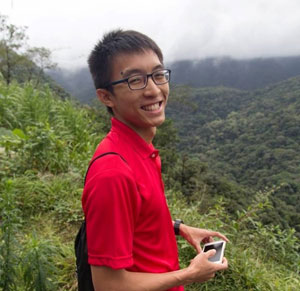 He had five sites, each with paired control (HPS-lit) and treatment (LED-lit) streets, where he simultaneously monitored bats (using acoustic detectors) at randomly selected lampposts, working in one site per night and rotating among sites.

Kenneth recorded 8 405 bat passes (sequences of at least two echolocation calls by one individual no more than one second apart), from seven species, but mostly Scotophilus kuhlii (66 %), Myotis muricola (17 %) and Saccolaimus saccolaimus (13 %). He also recorded 215 feeding buzzes (stereotypical sequences of calls increasingly close together emitted at the terminal phase of prey capture).

But light type didn’t affect the dependent variables he measured – not total activity (an index of abundance; chart on the left), feeding buzz ratio (relative foraging activity; chart on the right) or species composition. 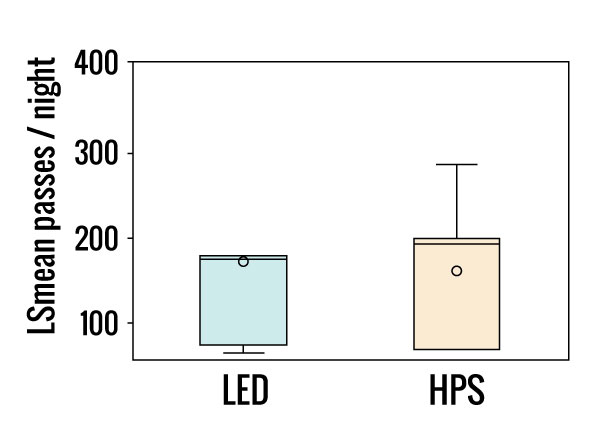 Thus, the retrofit may be irrelevant to bats, which might reflect the fact that relative foraging activity was so low (2.5 % of passes). Clearly, these bats aren’t hunting at streetlights so much as commuting along streets. Perhaps the insects that these streetlights attract, as prey items for these bats, just aren’t profitable (not worth attacking) or aren’t available (bats can’t detect or handle them).

Kenneth is a research assistant at Yale-NUS, in the lab of Prof Eunice TAN, where he’s studying anti-predator adaptations of phasimids, including stick insects that he had to go and collect in Borneo (again, rough life ;-)).