The term kiasu, from Hokkien, is best described as “fear of losing out”. It’s kind of like the concept of keeping up with the Joneses, but way more intense. and it’s one of the most distinctive traits of Singapore culture. It manifests in diverse ways, but especially as a competitive mindset in which pursuits such as reserving a spot at a table (which we call “choping”, as in rhymes with hoping) and scoring a bargain or a freebie are perceived as important. No doubt, kiasuism is a big contributor to our highly consumerist society (where shopping is a top pastime).

Shu Tian was interested in how pervasive this mindset is among millennials and the extent to which it contributes to the knowledge-behaviour gap of conscious consumption, which is a type of pro-environmental behaviour. Her hypothesis was that those who know more about environmental issues are more inclined to consume consciously, whereas those who are more kiasu are less likely to do so because kiasuism promotes materialism and prioritises individual over environmental interests.

She tested her ideas in a study population consisting of youths enrolled at the three main types of post-secondary institutions (universities, polytechnics and institutes of technical education). She employed a three-stage mixed methods design. The first step was a series of focus-group discussions to see which environmental issues this population is most familiar with and the most common ways individuals practice conscious consumption. Next, having clarified and contextualised her study variables, she constructed an appropriate questionnaire that also assessed kiasuism – she analysed these quantitative results using structural equation modelling (SEM). Finally, she qualitatively explained questions that arose from the SEM using semi-structured interviews with individuals who exhibit more traits of kiasuism or conscious consumption.

Ultimately, kiasuism doesn’t promote conscious consumption (CC). That’s the dotted arrow in this SEM figure. But it is related to three environmental value (EV) orientations that Shu Tian identified – positively to egoism (self-interest) and social-altruism (perceived moral obligations toward others) and negatively to biosphericism (concern for non-human organisms and the biosphere). These three EVs are also positively related to EK, which does predict CC. 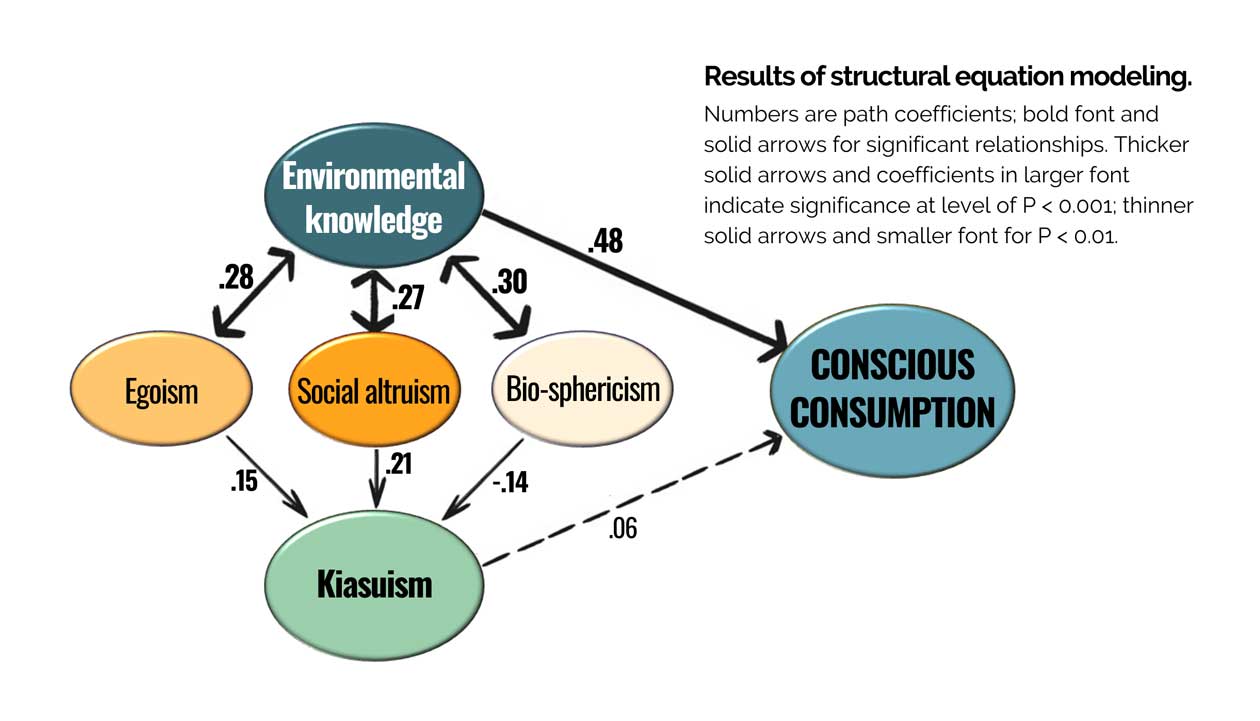 Looking more deeply at the qualitative data and prior studies, Shu Tian hypothesises that SG’s society is in a transition state, with “kiasu environmentalists” slowly emerging. And maybe, as environmentalism becomes more mainstream and social norms shift toward post-materialism, kiasu youths, motivated by their desire to keep up, will drop out of the rat race to embrace a more sustainable lifestyle.

After completing her BES degree, Shu Tian worked as a research assistant at the Saw Swee Hock School of Public Health at NUS, where she investigated the socio-ecological aspects of health and behaviour. She starts her PhD at Singapore Management University in August 2021.