Considerable research suggests that our childhood experiences in Nature influence our affective connection to Nature (CTN: emotional affinity) and environmental education increases our cognitive environmental knowledge (EK: how well we can identify or define ecological symbols, concepts and behaviours). Each outcome (greater CTN and EK) in turn promotes pro-environmental behaviours (PEB: the actions we take that reduce harm to the environment or benefit it). But these interactions had seldom been studied in tandem, let alone outside the Western hemisphere.

This is the research gap that Jia Xin set out to fill with a two-part study that examined (1) predictors of CTN, EK and PEB and (2) use of nature spaces in Singapore (SG).

SG presents an interesting study population because it is labelled as having low affinity to Nature and this has implications for SG’s liveable-city goals. For example, a 2019 study revealed the link between this attribute among children and human-wildlife conflict. This phenomenon (low CTN) may be linked to SG’s 100 % urbanisation rate (all residents live in urban areas) and the fact that original forest cover has been nearly entirely replaced with impervious surfaces and managed green spaces. Thus, this is an environment where humans’ innate desire to affiliate with Nature (biophilia) is met by the largely anthropogenic variety – indeed, a 2014 study demonstrated that Singaporeans prefer manicured greenery over more natural landscapes.

The study population consisted of 431 NUS undergraduates in all faculties. And using a structural equation modelling approach, Jia Xin found support for all five hypotheses. In a nutshell (and as shown by the figure below), informal environmental education, especially through the media, most increases EK and thus, is the best indirect predictor of PEB. But these behaviours are also strongly promoted by CTN. And the most connected individuals are those who report the most current and childhood contact with Nature and, even more so, direct childhood experiences in Nature. 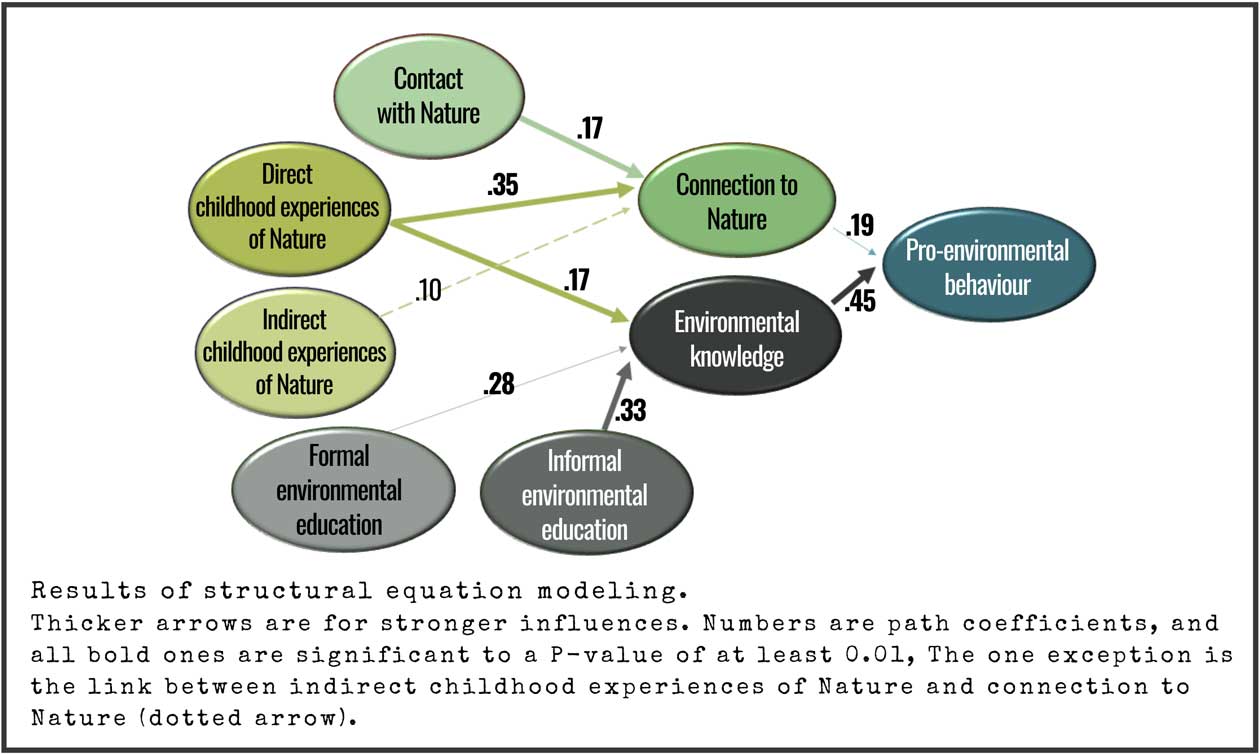 Jia Xin also found that parks and park connectors are the Nature spaces that NUS students visit most often and that women and respondents with lower incomes are most likely to engage in PEB.

This study highlights the importance of promoting indirect environmental education through the media and giving kids more direct contact with Nature. Moreover, these objectives are vital to any societal shift toward increased connection to Nature and knowledge of environmental issues. Given that SG is one of the world’s most affluent and consumptive societies, promoting PEBs among its residents is a worthy goal – one that also aligns with SG’s reputation and aspirations as a leader in urban planning for liveability and sustainability.

Jia Xin works as an environmental consultant on the management of contaminated sites.