Although the bats of SE Asia are very diverse (its ~330 species account for more than a quarter of all extant bats) they are poorly studied. But they play key ecological roles. One is seed dispersal of native trees by fruit bats – a role that could translate into valuable ecosystem services (ES).

One big threat to bats (as to wildlife generally) is urbanisation, which is very rapid in SE Asia. In Singapore (SG), the urbanisation rate is already 100 % and this plus severe deforestation has led some to call SG a regional “ecological worst-case scenario”. It has certainly lost several bat species.

This was the first systematic study of fruit-bat diets on an urbanisation gradient. Angela focused on dog-faced fruit bats, Cynopterus brachyotis (CYBR for short) – a key seed disperser. It also seems to be an urban adapter given how common it is along SG’s urbanisation gradient and (in contrast to its being limited to foliage roosts elsewhere) its local use of commensal roosts, as Zoe found.

Two other points of context matter. First, as Cheryl found, Singaporeans are not especially knowledgeable about or enamoured of bats. So, they may not support conserving bats – showing that bats provide ES might help. Second, SG’s flora is dominated by exotic species. On one hand, this could benefit frugivores by reducing natural patchiness of fruits. On the other, any dietary shifts in seed dispersers could alter dispersal of both natives and exotics. This matters in SG’s fragmented landscape, especially given the government’s aim to naturalise green spaces. 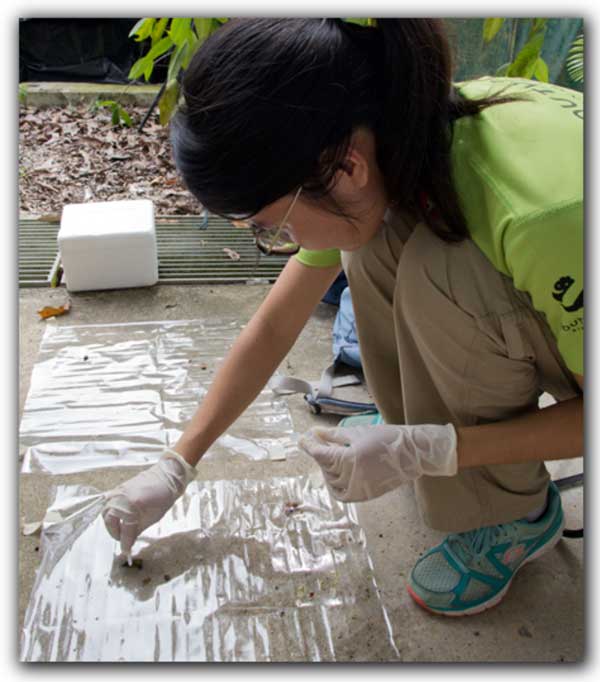 The hypothesis was that urban floral changes limit the dietary breadth and consumption of native plants by CYBR. Angela tested it at nine sites with commensal CYBR roosts on the urbanisation gradient, where she sampled droppings (feces and discarded food items) under each roost. That’s what she’s doing in this photo.

DNA barcoding (thanks to a generous grant from Wildlife Reserves Singapore) revealed a total of 33 species in CYBR diets. Most were exotic, but the three most important ones were native.

And urbanisation limits neither its dietary breadth nor its consumption of native plants. Maybe we shouldn’t be surprised. Because elsewhere, CYBR forages far and wide, a habit that could mitigate any urban reduction in fruit. Surely, its catholic diet and willingness to eat exotic plants help too. And maybe that’s the key to its urban success. Because exploiting urban ornamentals has, in at least one case, allowed fruit bats to expand their ranges.

As for ES, there were seeds of 14 species under roosts – seeds bats had clearly moved away from parent plants, suggesting potential for urban seed dispersal. But hey – it’s only seed dispersal if the seeds remain viable. And they do, as evidenced by high germination success. Of course, that was in vitro – recruitment depends on the fate of seeds in the field. And several seeds were in spots where they’ll never become trees either because the substrate is hostile to germination or because people will remove them.

To call it an ES, we must also ask which plants bats disperse. And some are invasive, such as spiked pepper (Piper aduncus). And some, such as Fagraea crenulata, only occur in horticulture, so CYBR could help them escape cultivation. Those would be ecosystem disservices. Still, its most important food plants are native. Like the Tembusu (F. fragrans)– a heritage tree that CYBR ate most often. So, it may help maintain populations of native trees.

Finally, we must ask where CYBR eats. And we can’t really say because we didn’t track them – this would be a good next step in this line of inquiry. Still, finding DNA from an unidentified species of Avicennia, a mangrove tree, 6 km from the nearest mangrove suggests CYBR must at least sometimes forage far enough away from its roosts to disperse native plants over long distances. Besides, it eats fruit from pioneer trees, such as tiup tiup (Adinandra dumosa), and drops seeds in more degraded, urbanised patches. In doing that, CYBR might promote forest succession. And if it eats rare, native trees in Nature Reserves and disperses them outside, then it could help establish urban populations to buffer from extinction.

Angela is now a biology teacher and award-winning wildlife photographer.