I initiated this project in two contexts.

One was the state of the global environment. Like most scientists, I was alarmed by the 2018 IPCC Special Report, which clearly highlighted that the targets laid out at COP21 were too soft and that the window of opportunity to limit warming this century to 1.5ºC above pre-industrial levels (an absolute must) will close in 2030. I was equally concerned about the dramatic biodiversity loss highlighted in the 2018 Living Planet Report, with 60 % declines in more than 4 000 vertebrate species from 1970 to 2014 and many other recent publications pointing out that the sixth extinction affects invertebrates too.

I know the root driver of the environmental crisis is the combination of overpopulation and overconsumption. And I know the solutions are profound and complex and certainly involve top-down and bottom up measures. But with the solutions (like shifting to a 100 % renewable-energy world and going zero-waste) widely viewed as inconvenient, costly, difficult, unpalatable or even punitive, many individuals, corporations and governments are slow to act. This is true in most nations, including Singapore (SG), where even basic proposals, such as taxing plastic bags, are vociferously opposed.

The second one was the NUS context. I was aware of the President’s commitment to sustainability and the University’s plan, but I had also noticed some gaps as far as actions toward the goals. Meanwhile, I knew that some Bachelor of Environmental Studies students had expressed a desire to acquire sustainability accounting skills.

Hence my twinned honours projects to estimate the total carbon and water footprints of the Department of Biological Sciences (DBS). My plan was inspired by analogous exercises at other schools – exercises that yielded good publications and showed how such studies can enhance student learning and engagement, impart transferable skills and benefit sustainability. Nothing like this had been done in any university in SE Asia, let alone in the tropics. But I also hoped this study would galvanise my peers around a shared sustainability goal, stimulate other departments to follow suit and help NUS identify some potentially overlooked opportunities for footprint reductions.

Jiahui and Shaina worked very closely together, collecting data through semi-structured interviews with departmental faculty and staff, direct observation and review of invoices for the year 2018-19. They also received certification in sustainability reporting.

Jiahui estimated the total water use at 22 372 m3, with equal contributions by direct and indirect water consumption. By indirect, I’m referring to the water embodied in all the things we consume, and in DBS’ case it’s mostly (82 %) blue water (surface water). As shown in the donut chart on the left, catered food accounts for nearly half of indirect water consumption. The next biggest contributors are electricity use and consumables (mainly plastics used in labs), respectively. Shaina focused on the carbon footprint, which totalled 5 826 tonnes – mostly scope 2 emissions (electricity use), which totalled 3 480 tonnes, as shown in the donut charts on the left. We also see that the next biggest contributor was air travel, at 2 266 tonnes.

We are reworking both theses into one MS and will submit it for publication in 2020.

Jiahui is working on the Natural Capital Singapore project, which addresses the integrity of ecosystems in SG and quantifies and valuates the services they deliver. Shaina is working at Ernst & Young, where she is applying the knowledge and experience gained during her FYP to corporate sustainability accounting and reporting. 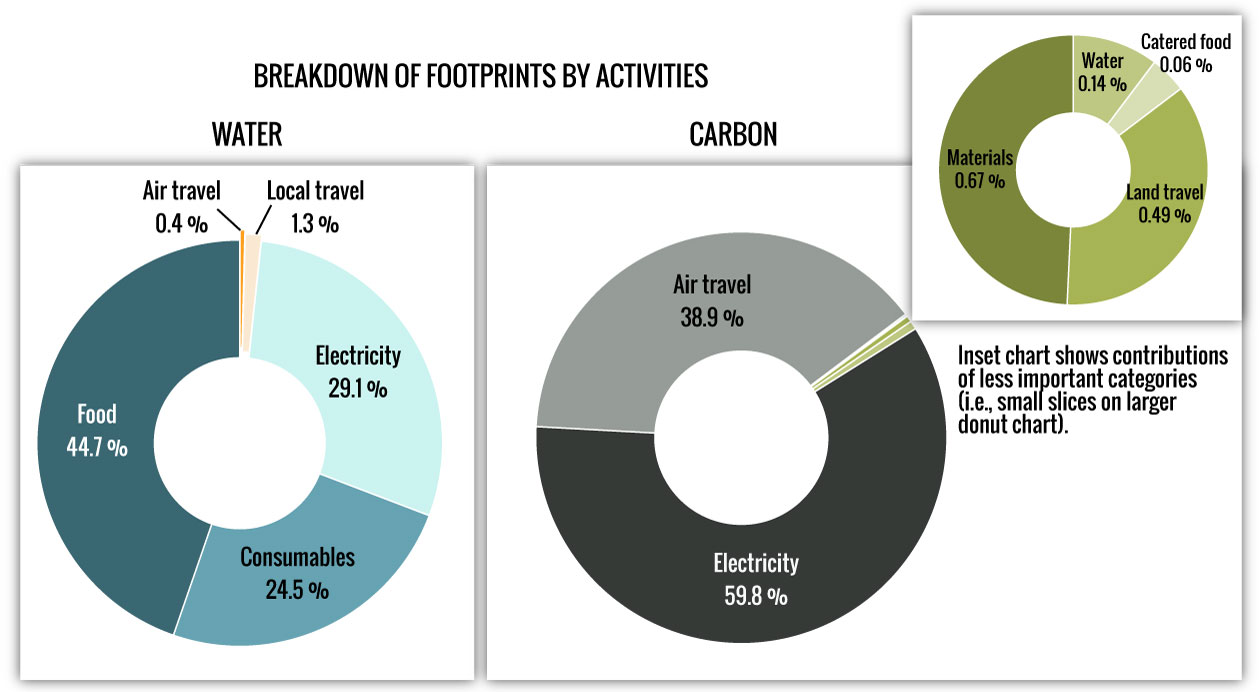